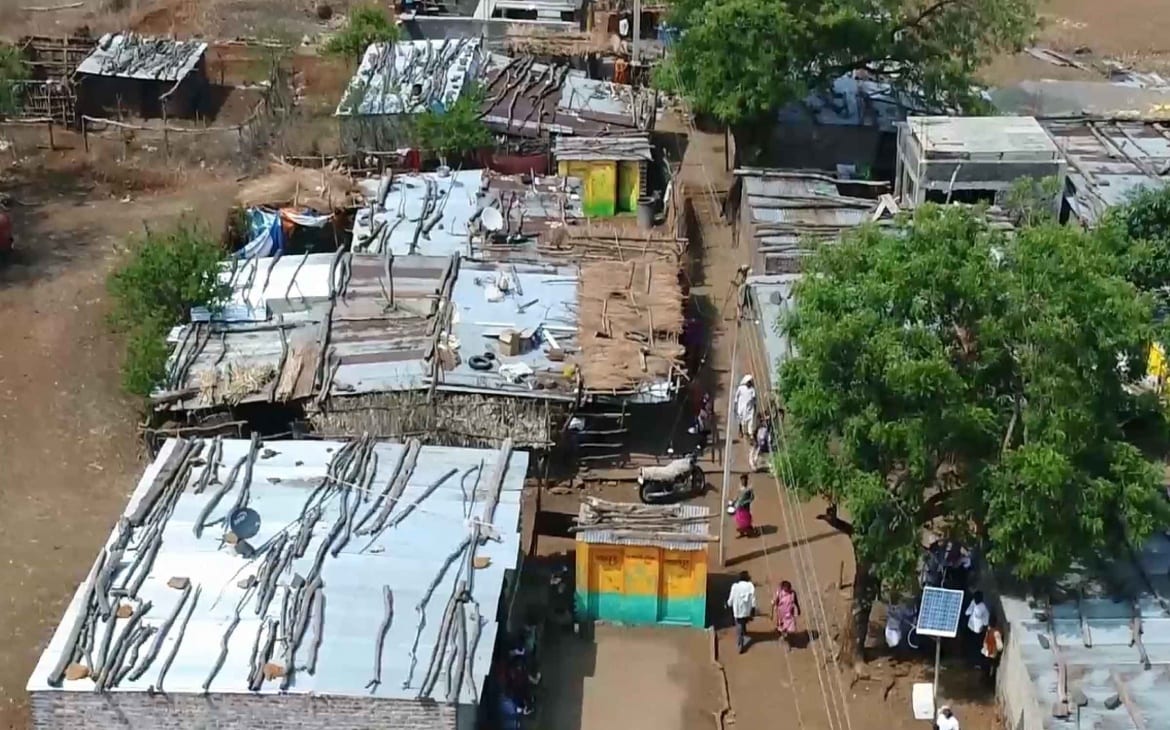 Most urban dwellers in India most likely cannot even think of places in India today that don’t have electricity. Or running water. But the truth is that even in the 21st century India of the future, there exist many such places that are “off the grid”.

One such place was a village called Lonewadi in Yavatmal, Maharashtra. In 2009, 52 years after independence, Lonewadi had no roads, no electricity, no water distribution system. To add to this, open defecation was widely prevalent due to a combination of no water and no toilets, posing a big health and hygiene challenge for the village residents.

This is when Lonewadi’s small school became a Zilla Parishad school and saw Narawade Sir joining as a teacher. He saw the issues firsthand and knew Lonewadi needed many solutions. He first started with making the people of Lonewadi aware of the importance of school and education.

During this time, we visited Lonewadi too and started taking the first steps towards Lonewadi’s transformation. Through our Vidyadeep initiative, we started providing solar lamps. We started by distributing these to students first. Then, we worked on installing solar streetlights on every road. Simultaneously, we also provided solar lamps to every house in the village. For the first time, every house was lit up and you could sense a new hope in the air and a spring in everyone’s steps. Students especially were thrilled because they no longer needed to use kerosene lamps to study.

After lighting up Lonewadi, we started work on bringing water to the village. Situated on the hills as it is, bringing water to Lonewadi with a pump is not easy. Every day, the villagers used to go down the hill to fetch water, walking 2 kms to collect water from a well, an especially risky trek during the rains. We installed a solar water distribution system which became fully operational in January 2014.

We then shifted focus to the sanitation challenge. In July 2015, we inaugurated the first bio-toilet, exclusively for old people. This was actually the first toilet Lonewadi ever saw, kickstarting the ODF movement. Eventually we build 28 toilet-cum-bathrooms in Lonewadi. In fact, it was the first time ever in India anyone had built public toilets with bathrooms.

With patience, persistence and continuous efforts, we also got the government to construct roads and bring electricity to Lonewadi during this period. We also constructed a school and got Lonewadi her first computer on her transformation from a tribal village to a smart village.

In 2015, we also started Shivprabha Mahila Gruhudyog to help women from Lonewadi generate a livelihood. Women started production of insecticides to earn incomes through this initiative.

Till now, farming was Lonewadi’s sole means of sustenance and we decided to help farmers too. We procured water pumps for all farmers to help with irrigation. We launched the Shivprabha Farmers Club, which has seen many farmers being able to turn around their lives. The Shivprabha Farmers club introduced farmers to organic farming concepts, reducing their need for and spend on fertilizers. Our initiatives helped many farmers and many other villages too have adopted similar concepts to help farmers.

One of the biggest worries for rural inhabitants is the expenses involved in getting their daughters married off. We helped with this too, arranging group weddings for 20 girls from Lonewadi.

We also started a meditation camp in Lonewadi to help people appreciate the importance of nature and conservation.

Our efforts over the past few years have seen Lonewadi transform into a self-sustaining one-of-its-kind village in India, a transformation we are very proud to have been part of.